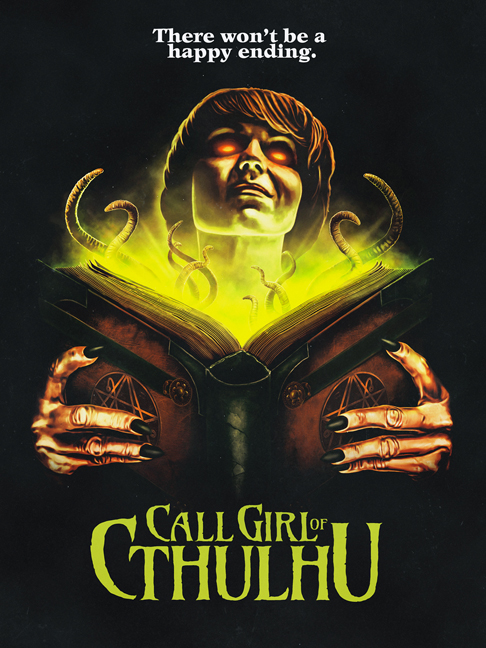 CALL GIRL OF CTHULHU was directed and produced by Baltimore natives Chris LaMartina and Jimmy George in 2014 under their Midnight Crew Studios imprint, also responsible for 2013’s flawless homage to ‘80s Halloween television, WNUF HALLOWEEN SPECIAL.  In CALL GIRL, the duo brings the same infectious enthusiasm for the genre they brought to WNUF, while ratcheting up the special FX and gore to deliver one of the most insanely fun and splat-tastic adaptations of H.P. Lovecraft since Stuart Gordon’s RE-ANIMATOR and FROM BEYOND.

CALL GIRL OF CTHULHU SYNOPSIS
Carter Wilcox is a struggling artist saving his virginity for someone special. When he meets the enchanting escort Riley Whatley, he believes he’s found the one. Unfortunately, she’s also "someone special" to an ancient cult convinced she’s the chosen bride of its alien god, Cthulhu.  Forced to mate with the tentacled deity, Riley begins to mutate… into the perfect vessel for the spawn that will destroy mankind!

Now, Carter and his noise musician roommate Erica Zann must battle the sinister cult and unimaginable creatures to rescue Riley and save humanity…or surrender to the slimy grip of the Great Old Ones.

"This cool flick is witty and packed to the gills with campy effects and lots of good, gory kills"
- Rue Morgue Magazine

"low budget goofy fun, better than it should be and quite splattacular"
- Aintitcool.com

“finds all sorts of sexy, splattery, silly ways to riff on the eldritch author while still bearing an underlying reverence” – Fangoria